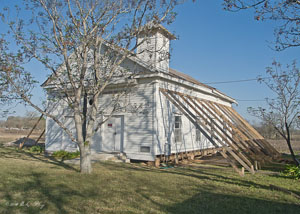 The Capote Black settlement of Guadalupe County, Texas is a classic example of the origin, evolution and transition of African Americans from life as slaves into lives as American citizens. The church is one hundred and forty years old. I have been working with the Capote Restoration Committee since fall of 2012 to preserve the structure and document its construction.

There are many lessons of sustainable construction integrated into the structure. I thought it would be appropriate to share one for Earth Day 2013. A significant amount of history has been gathered regarding the pottery works that members of the Wilson family operated from ca.1857 to 1903. The African American business produced things such as storage jars, urns, and churns. One of the reasons for the success of the pottery was the availability of native clay soil with inherent plastic and adhesive qualities.

In the process of systematically disassembling deteriorating parts of the church I asked the general contractor, Earl Greenwood, to excavate to the base of some of the brick piers. At the bottom, we discovered hand formed concrete footings. After some research I found out that a White medical physician and chemist, Dr. John E. Park, had developed a formula for load bearing “limecrete” in the Seguin area in the 1850’s. Dr. Park used native materials from central Texas, including the same type of clay soil that the Wilson’s used in their pottery. Various historical sources also, verify that Dr. Park used African American slaves as labor to build a number of “limecrete” structures in Guadalupe County before the Civil War. The African Americans who worked for Dr. Park are not given much credit for knowing how to mix the “limecrete”. But none of the thirty five “limecrete” footings at the church have disintegrated or cracked over more than 100 years of service. “Limecrete” has the ability to absorb and release moisture as the moisture content of the surrounding soil changes.  The footings are even specifically shaped according to their particular locations, interior, corner and perimeter. It’s obvious that African American knowledge of local construction materials and techniques has been underestimated. Surely there are other similar untold stories across America.